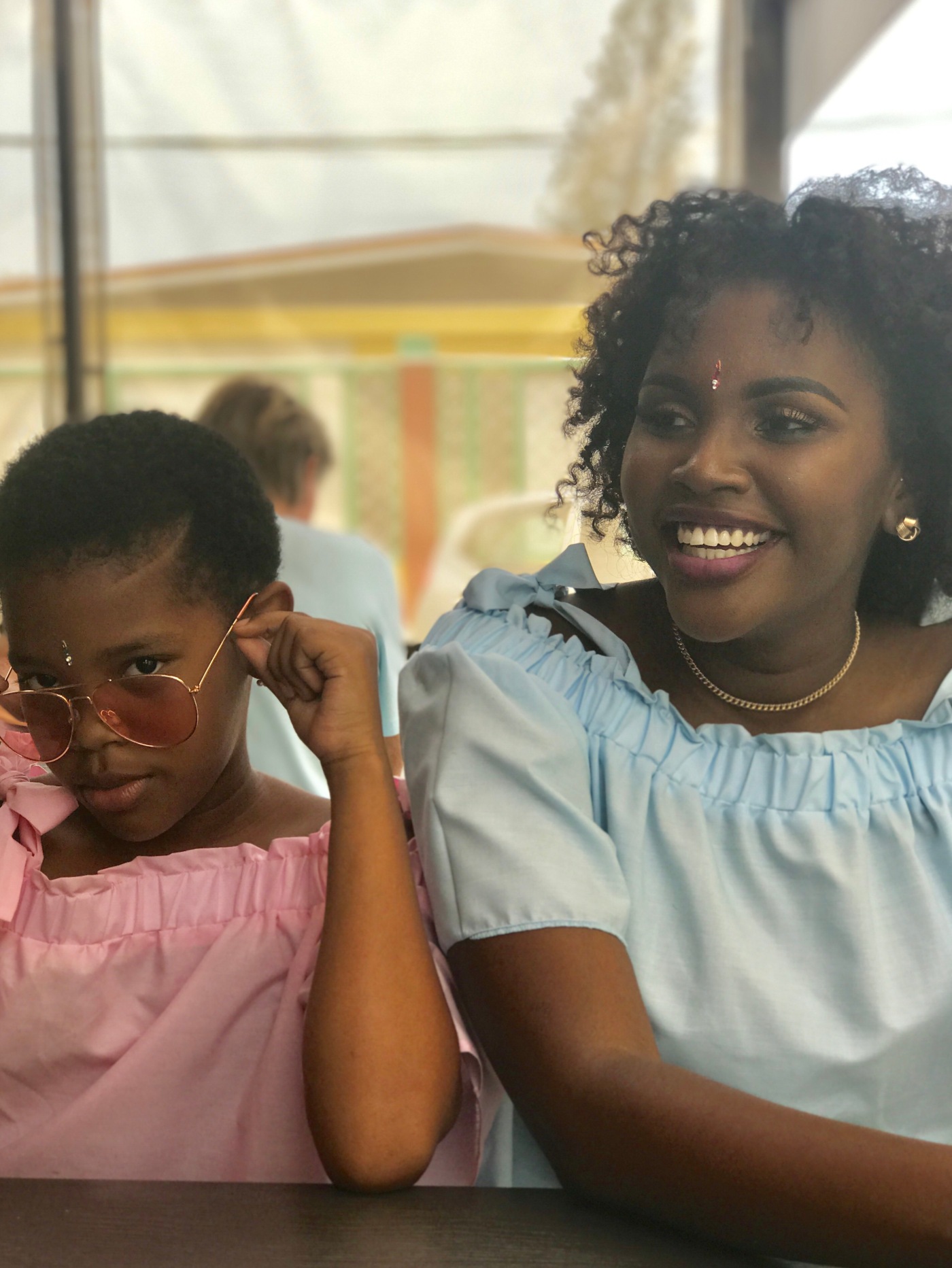 I can still recall every moment leading up to the second that I gave birth to Kiara.

I met my daughter’s dad when I was in third form and on my way home from school one evening. Little did I know he’d later become my ‘high school sweetheart’. I never had a ‘serious’ boyfriend before I met him. I mean, I was 14, how serious did I really think it could get? We went to different schools but for my fourth year in secondary school, my parents transferred me to the same school as him. No, this was not because my boyfriend attended this school, do you think my parents are that mental?

My parents and I never had ‘the birds and the bees’ talk so everything I ‘learned’ and  thought I knew about sex were from the occasional Lifetime movie. When I think about it now, I did sneak and watched ‘Kamasutra’ when I was 11 but I didn’t know what I was watching then. I don’t even remember any of my friends talking about sex and if they were, no stories were shared with me. There wasn’t anyone I could talk to about it either so when he said he wanted to, I did. What’s it Rihanna said? Stupid in love. I was young and dumb, doing things I had absolutely no right doing because I was even clueless about the fact that we should have been using condoms. I’m sure you’re reading this thinking, “Seriously?!” Yes, seriously.

So the inevitable happened- I got pregnant.

As soon as I missed my period, I knew what it meant. Despite not having ‘the talk’ I got the gist of what a period was. The first and only person I told at the time was her dad. I was uncertain about what to do and naturally I asked him what he thought. Let me just take another moment to reiterate that I was young, dumb and in love. He suggested that I not tell anyone and so I didn’t. So it was decided, we were going to be parents…mind you, I was 16 and he was 15. Take a deep breath, there’s more.

Picture this; April 2007, it’s my final year of secondary school and I’m not missing any classes because CXC’s were coming up. There I was trying my best to focus in Physics class and still hide the fact that I’m pregnant. Honestly, I don’t know how I hid it so well for so long.

You’re probably wondering how my parents didn’t know something was up, especially my mother who should have that ‘maternal instinct’ but to be honest, my mother was not the most in-tuned to us. She wasn’t a stay at home mum. She worked long crazy hours and it was easy to avoid her. I think if she paid a little more attention to me, she would’ve known sooner but I would never blame her for any of it. The reality of morning sickness literally hit me during the early months of my pregnancy and it was the worst! I remember one morning before school I decided to have a yoghurt for breakfast. I hadn’t taken two spoonfuls before my head was outside of my bedroom window throwing up. And with perfect timing, my mother came into my room that very second. Of course, she’s going to question why I’m throwing up so had I to think of something quick. My alibi? I told her to throwout the yoghurts in the fridge because I think they’re all expired. *phew*

I couldn’t keep my pregnancy a secret any longer so I decided to tell a couple of my close friends at school what was going on. First on the list, Nichola. *shakes head* Nichola, Nichola! Co knew some old wives’ tale about drinking a hot Guinness and it would stop you from having a baby just like that… little did we know that drinking a hot Guinness meant boiling the bottle in hot water first. What could it hurt? We had a master plan that would work (or so we thought). She bought the hot Guinness and the next day, Nichola and my other friend Ray and I went to an empty classroom and I drank it. I thank Nichola for wanting to help me because I was fully aware of what her mother would’ve done to her had she found that Guinness hidden in her panty drawer. A heavy cut a**! It’s safe to say the hot Guinness did nothing but make me tipsy.

Months are passing by, and I still haven’t told an adult…

The day came when I decided to tell my older sister- she freaked of course and the downward spiral began. She then told my younger sister who then told my oldest sister and then my younger sister told my mother. I would’ve been grateful if she told my mother to help me get this burden off of my chest. But no, she told my mother because she wanted something and to get it she blurted out that I was pregnant. At this very moment, I was at a picnic with my best friend, clueless to what was transpiring at home.

I came home from the picnic all willy nilly. My mother wasn’t home so I went to my dad in his studio to let him know I was back. Then I went into the house; as soon as I got in, my sister said, “They know.”

My heart sank. I didn’t have to ask another question because I knew exactly what that meant. They’d just found out that their teenage daughter was pregnant. F*ck.

I ran upstairs to my room, locked the door and planned to runaway. There was no way my parents were going to let me live with them after this. This was the moment I had been fearing for the last 5 months. I had already made up in my mind that when my parents found out I was pregnant, I would be out on my a**. I heard my mother’s jeep pull into the driveway and I prepared myself for this sh*t storm that was about to hit. She knocked on my door, I opened it and then she told me to follow her. She took me outside to sit in the driveway. I could see she had been crying. She flat out asked me, “Are you pregnant?” Now, I have not seen my period for 5 months, I can feel the baby kicking inside of me, I did not take a test but I knew damn well I was pregnant. Yet, my response was a shrug.

My mother is not from the Western World. She’s an Indian born in Malaysia. She couldn’t believe what was unfolding in front of her eyes. How will she tell her family? The shame. And I knew all of this, which is why I hadn’t said anything!

After all the crying and apologising, I finally went to bed. The next morning there was another knock on my door, this time it was my father. I looked at him expecting him to bite my head off but instead, he said, “Don’t worry, it’s going to be okay.” And I just broke down crying. I found out after this that my dad told my mother he knew. Really?! Why didn’t you say something sooner?

By that afternoon, I was sitting in the Family Planning Clinic with my mother who was adamant I could get a termination. To no surprise the nurse told her what I already knew. It was too late to terminate.
So, I was 16 and about to have a baby in November.

I felt so relieved to have the burden of carrying this secret lifted. Everyone could tell too because I was finally showing. Now I had to figure out, how do I become a mum?!

Once my mother accepted the fact that I was about to have a baby, she was all in and went all out. Any questions, she had the answers or she bought the books with the answers. Every food I craved, she got it. Maternity clothes, she bought it. Lamaze class, she enrolled me. All the things the baby needed, she got. Please remember, I just finished secondary school. I wasn’t working. I was doing evening classes and learning Cantonese. But she made sure “he” could have it all. Yes, he. I was told I was having a son so I bought everything in blue. Next time, I’m buying neutral colours. I even painted my room green (I hated the colour with all my heart) just for him.

I was due on November 22nd and I had agreed with my doctor to be induced on that date. I arrived at Bayview Hospital at 07:30 that Thursday morning raring and ready to go. I don’t think I was ever as scared as I was on that day in my life! “It’s really happening!” I thought. I won’t put you through all the gory details of my enema, them having to break my water, the screaming, my contractions, my friend fainting in the room. Just know, by 17:30 I realised I didn’t have a son, I had a daughter!

I don’t want to sound cliche but, it hasn’t been easy but it has definitely been worth it.

I struggled initially to be a mother. I was still a child and still making dumb mistakes. It was hard. There were good examples I needed to set and my friends didn’t understand that I couldn’t do certain things. I didn’t understand that either. But I can surely say that I’ve learnt and I am still learning to be the best mother I can be.
Kiara is 9 years old now and I couldn’t imagine life without her. She is so loving, so free-spirited, so talented, so stuck in her ways- so much like me, it’s unbelievable. She has so much confidence; I look at her sometimes and think how did I do that for her when most days I didn’t even have that in me.
The hardest decision I ever made in my life happened in May 2015 when I moved to London without Kiara. Being away from her has been hard and it’s one of the things that has contributed to my depression and down moods. I love Barbados (for holiday) but I don’t want Kiara to be trapped there (that’s how I felt). When I was 16, I intended to return to the U.K. and go to college but plans changed (obvs). I want to offer Kiara that opportunity, so I decided I would return to the U.K and I’d move Kiara as soon as she’s finished primary school. I didn’t want to bring her when I first made the move. The two of us up here like headless chickens wouldn’t be ideal.

In a couple of years, I’ll wake up to my baba everyday and life will be perfect again. 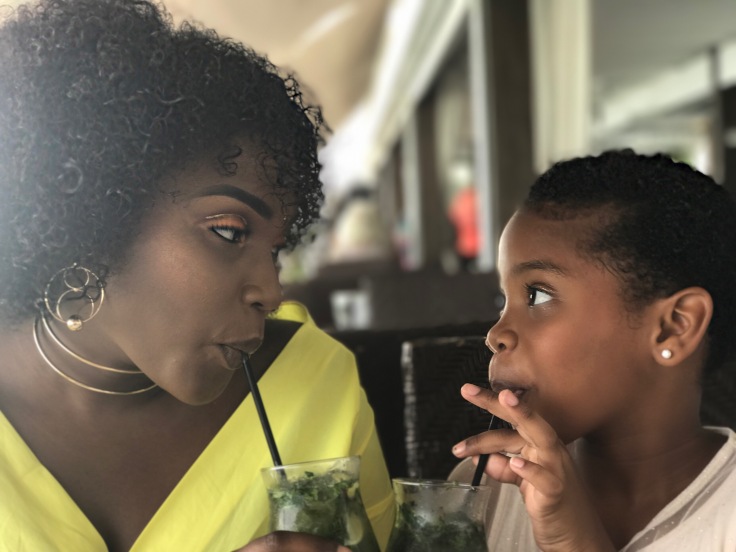 She’s my world and I talk to her as open as possible. We’re constantly sharing with each other and I don’t take this for granted. Mini KP won’t be so mini much longer. I’m wishing for greater things in her life than I had in mine. I’m not saying my life was ruined by having a child at 16 but it was tossed upside down and I wouldn’t want her to go through what I did so I’ll always try my best to make sure the cycle isn’t repeated.
Life is beautiful and I want her to experience all its beauty as much as she can.